Best 10 Paved Roads in Colombia, for riders who want nothing more than to glide over smooth, sweeping, sealed tarmac for hours on end, this post is for you.

For Mike Thomsen, el jefe at MotoDreamer, naming his Best 10 paved roads in Colombia took a lot of deliberation.

One of the things we love most about riding in Colombia is there’s barely a road in the country – be it a major highway or a hidden back road – that isn’t either insanely fun to ride, incredibly scenic, or both.

Also, nearly all Adventure Motorcycle Touring riders come to Colombia for the challenge of pitting man and machine against miles of untamed dirt.

So many of Colombia’s best long-distance rides are on well-maintained, sealed roads, meaning you can easily extend your twisty fix for days without ever running out of pavement.

To pick out the best 10 paved routes for world-class, knee-scraping motorcycle riding in Colombia. We’ve narrowed our selections down to routes between roughly 100 and 200 km.

Depending on how you travel, they might make up just a part of your day’s touring, but they’re sure to stand out as high points in your memory.

Numero Uno of the Best 10 Paved Roads in Colombia

Starting in the town of Mariquita in the State of Tolima, this ridiculously steep route takes you through a mountain pass known as Alto de Letras.

Alto de Letras is notorious among cyclists as reputedly the longest climb in the cycling world, boasting a punishing elevation gain of 3,800m in 80km!

Remember, or those of you tackling the endless ups-and-downs of the route with the benefit of an engine between your legs. Also, you’ll be in awe at the almost sheer vertical climbs and dizzying descents.

Also, there’s a sense of otherworldly beauty to the landscape here as you ride through and above the clouds. Adding some luck, you’ll be treated to glimpses of the mighty summit.

Most of the cyclists you’ll see on the way up to the pass will eventually peel off to recharge in Manizales for the night. But the good stuff continues to Chinchina.

You will be elated with the prospect of another 60km of tight hairpins and swooping round-the-mountain curves on a highway in near-pristine condition.

Numero Dos of the Best 10

Cambao to Facatativa forms part of a popular route among riders between Manizales and Bogota. Why? Because it helps them in avoiding the busier Highway 50 via Honda to the north.

Starting from Cambao on the banks of Colombia’s longest river, the Magdalena, this 100km stretch takes you from the fertile river valleys up to the altiplano (high plain.)

Now you´ll be facing about 50 km of constant, winding, back-and-forth uphill and also, some genuinely gorgeous viewpoints of the rural surroundings.

Right before you hit the altiplano, things get very twisty indeed. However, the beautifully paved road is an action-packed joy to ride Motorcycle Touring Adventure.

It goes all the way until it rejoins Highway 50 50 for the final, relatively flat spurt to Facativa.

Numero Tres of the Best 10 Paved Roads in Colombia

This rarely visited route makes a great detour if you’re heading north out of Bucamaranga. It skirts past the Los Estoraques Unique National Area.

This National Park is known for its semi-desert landscape. It includes a long, rugged spine of brownstone columns and pedestals, each jutting dramatically out of a dry, dusty valley in the Catumbo River basin.

After Los Estoraques. The road gets all kinds of loopy, and with the bonus of little traffic to contend with. Thus, there’s plenty of opportunity for expert-level, footpeg-scraping entertainment.  Including a visit to the national park, this route is likely to take you all day.

The charming little village of Sardinata is a good place for a night’s stopover.

Numero Cuatro of the Best 10

San Gil has a reputation as Colombia’s adventure sports capital. But perhaps the best adventure it has to offer is the 100km Route 45A to Bucaramanga.

The route starts with a 30 km uphill climb to the township of Aratoca (1,702m.) Before beginning its stunning descent into the Chicamocha Canyon.

The road weaves and dips its way down to the bottom, and from almost any vantage point, the views are extraordinary. Furthermore, be enthralled with the steep canyon walls rising to meet you at each turn.

Then pause with the Chicacomocha River appearing and disappearing beneath you.

To ascend from the canyon requires looping your way around a series of switchbacks. Followed by a bridge crossing over the jaw-dropping rapids of the Umpala River.

Afterward, there’s a mix of relatively relaxing straights and fast corners. But remember, do watch out for traffic on the approach to Bucaramanga.

Numero Cinco of the Best 10 Paved Roads in Colombia

PASTO TO LA UNION TO MOJARRAS

The 30,000km route that makes up the Pan-American Highway comprises too many epic rides to count. But within Colombia’s borders, we nominate the 135km stretch between Pasto and Mojarras. This route takes Highway 25 east out of Pasto and passes through La Union.

Pan-American has some of the most impeccably maintained surfaces in Colombia. With the added bonus of having remarkably little traffic to boot.

Thus, allowing for fast, sweeping turns through a seemingly endless series of delicious curves. I do not forget each angle interspersed with exhilarating blasts through carved into steep mountainside tunnels. Rejoice as the road drops towards the bottom of an arid canyon.

The stark contrast in scenery between the volcano-encircled Pasto (altitude 2,527m.) And the dry, desert landscape around Mojarras is an extraordinary testament to the diversity of Colombia’s environment.

Numero Seis of the Best 10

Once you escape the grinding traffic of Bogota, there are awesome mountain roads sprouting from every direction. We particularly love the all-sealed route to Villavicencio.

This all-paved route makes a super high gradient climb through the mountains south of Bogota. Before transforming into a slithery canyon road with lots of dizzying downhill drops on its way to Villavicencio.

Villavicencio sits at the foot of a mountain and is known locally as ‘La Puerta la Lano’ or ‘Gateway to the Plains.’

Pass Villavo, and there’s nothing but flatlands for days straight as you cross the spectacular Llanos Plains to the Venezuelan border.

Numero Siete of the Best 10 Paved Roads in Colombia

This ride through lush mountain scenery makes a great day’s exploration if you’re staying in coffee country. La Virginia is a reasonably short spurt from Pereira or Salento.

This fun, curvy, but not too crazy route takes you through some of Zona Cafetera’s finest beauty spots. Experience riding next to hillsides verdant with coffee plantations and lush subtropical forests.

Thus, the endpoint, Supia, is a cute coffee town in the foothills and the perfect place to recharge with a cup of the local brew.

Numero Ocho of the Best 10 Paved Roads in Colombia

This ride starts 50 km east of Medellin, just past the International Airport. At Marinilla, the traffic peters out, and a winding highway spreads out before you.

Not surprisingly, this route delivers over 100km of twisty tarmac, with the occasional bunched-up hairpin section.  All set against an incredibly lush, steamy mountain backdrop. Discover hidden tiny villages that truly reflect life in rural Antioquia.

Finally, there’s a relatively straight dash into Doradal, whose main claim to fame is its proximity to Hacienda Napoles. Once, the infamous ranch-style home to Pablo Escobar.

Numero Nuevo of the Best 10 Paved Roads in Colombia

Imagine, you are heading south towards Medellin on Route 25, and you’ll meet this beautiful stretch of the sealed rural road high up in the Antioquian mountains.

Although the road is narrow, with lots of dark, tree-lined passageways, its countless curves are mostly expansive and sweeping, providing plenty of opportunities to get low down and dirty.

The route is pretty much all above 2,000m altitude; the road takes you through some picturesque, rarely visited towns. This route is where any Adventure Motorcycle Touring rider is sure to be a curiosity.

Numero Diez of the Best 10 Paved Roads in Colombia

CALDAS TO FREDONIA TO JERICO

Mike´s final pick is the delightfully convoluted route between Caldas, a lovely rural township 21 km from Medellin, to Jerico in southern Antioquia.

From Caldas, the highway is relatively fast and straight. The fun begins when the route starts to zig-zag up and down the mountains.

Expect a super-tight, Wrigley section to navigate right before Fredonia. From there, the road worms its way south to a bridge crossing over a majestic stretch of the Cauca River.

This route encompasses some of the wildest and most spectacular backcountry in all of Antioquia. 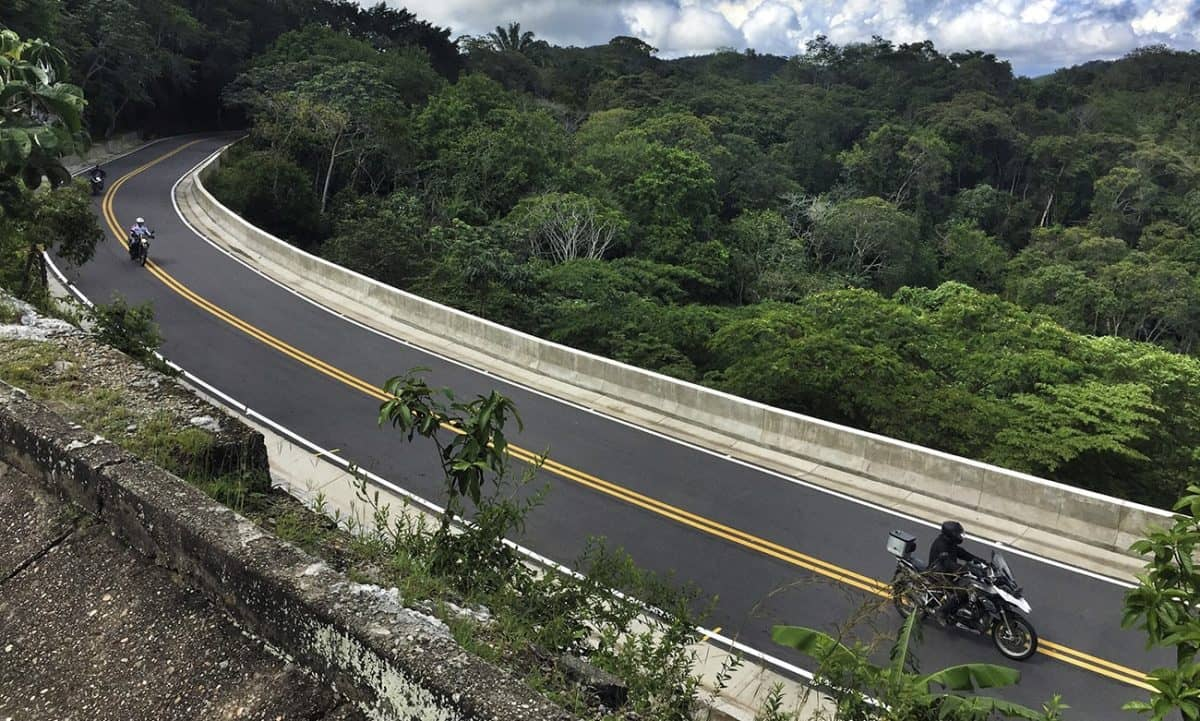 Stay on the road with us and explore lots more great facts regarding this South American “Jewel in the Crown” country.

Eight natural sceneries in Colombia that will astound you

Destinations in Colombia to add to your bucket list. With so many wildly varying destinations, planning a trip to Colombia can be overwhelming! To give you some inspiration, we’ve compiled a list for you.

Twist and Turn with us at  MotoDreamer In Colombia