Colombia’s history is as rich, surprising, startling and complex as its geography. It’s this history that has led to a blending of people and cultures unique in all of Latin America.

When you look at the country’s tumultuous, often brutal history, it’s almost miraculous that Colombia has survived at all – let alone functioning successfully enough to now be attracting record foreign investment and a growing number of tourists year-on-year.

Sure, the country has a long way to go in many aspects. But for the international traveller, the Colombian experience will hopefully leave you full of positivity and hope.

If you want to try and “understand” Colombia, the best place to start is learning about its history.

Colombia has been inhabited for at least 12,000 years. Unlike the empire-building Inca and Maya, Colombia’s first people, such as the Musica and the Tairona, developed small hunter-gatherer societies.

We still know relatively little about the lives of Colombia’s original people. What we do know about pre-Colombian society comes from three main archaeological sites in particular – San Agustin, Tierradentro and Ciudad Perdida (“The Lost City”).

While Colombia took its name from Christopher Columbus, the Spanish explorer never set foot on Colombian soil. It was a companion of Columbus’, Alonso de Ojeda who became the first European to land on Colombia’s Atlantic coast in 1499.

During his exploration of the Sierra Nevada de Santa Marta region, Ojeda was astounded by the wealth of the natives. The local Tairona were skilled metal workers, fashioning exquisite ornaments from the rich gold deposits at the foothills of the mountains. What they saw gave birth to the legend of El Dorado – a mysterious city of gold, deep in the jungle and overflowing with untold treasures.

On an obsessive quest to discover this mythical city, the Spanish built their first permanent settlement in Santa Marta, with Cartagena following shortly thereafter. Indigenous tribes who resisted were easily overcome by the superior weaponry of the conquistadors.

By 1549, the region was declared a Spanish Colony, with Bogota as its capital. Back then, Colombia included modern-day Venezuela, Ecuador and Panama.

The Spanish never did find their El Dorado, but they struck serious gold nonetheless. An estimated $639,000,000 worth of gold was mined from Colombia from the conquest until 1886.

The Spanish went about spending their newfound wealth on gilded cathedrals and lavish mansions, relying on their indigenous “subjects” for labour. However, outbreaks of European diseases swept through indigenous communities, significantly reducing the labour force.

The Spanish sorted out the worker shortage by sending for ships full of slaves from Africa, setting up Cartagena as the Caribbean’s most important slave-trading port.

The Caribbean and Pacific regions, where the Spanish originally docked their slave ships, remain home to Colombia’s largest Afro-Caribbean populations.

Over time, the three racial groups –  Europeans, Africans and indigenous Colombians began to mix. Today, many Colombians are mestizos (of European-Indigenous ancestry) and mulatos (of European-African ancestry). However, class divisions cut deep, and the Spaniards kept a tight fist around their political power and wealth. 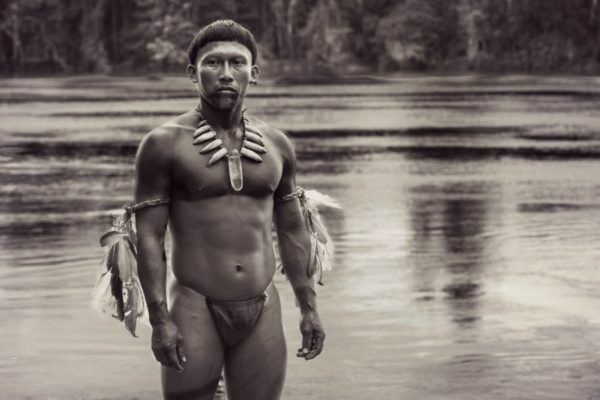 After almost 300 years of Spanish subjugation, the native populace decided to make an organised stand.

Enter “The Liberator”, Simon Bolivar, hero of the independence movement. Bolivar had already spent a decade fighting the Spanish in his native Venezuela when his ragtag army of 2,500 men trudged across the flood-swept plains of Los Llanos and the frozen mountain pass of the Paramo de Pisba on their way to stop Spanish reinforcements from reaching Bogota.

On 7 August 1819, Bolivar’s men successfully intercepted the Spanish troops. The legendary Battle of Boyacá ended with the royalists surrendering after two hours, and Bolivar marched into Bogota without resistance. Although the fighting continued for several more years, the day is recognised as the definitive moment Colombia gained independence.

1819 marked the formation of a new, independent republic, known as “Gran Colombia”, made up of Venezuela, Colombia, Panama and Ecuador. Bolivar was elected President, and Francisco de Paula Santander became Vice President.

Gran Colombia was to be a short-lived dream. Bitter rivalry between the two leaders and simmering regional tensions soon saw Bolivar’s dream of a united Latin America swiftly disintegrating. In 1828, in attempt to hold on to power, the “Liberator” appointed himself dictator, but resigned in 1830, by which time Venezuela and Ecuador had seceded from Gran Colombia.

The debacle left Colombia in a deeply unstable state. No less than seven civil wars broke out between 1851 and 1891, with much of the conflict due to antagonism between the country’s two political parties – the Conservatives (supported by the landowners and the Catholic Church) and the workers’ party, the Liberals.

A HISTORY OF VIOLENCE

These warring factions sowed the seeds for another century of political violence.

Although the early 20th century saw a brief period of peace as the coffee industry brought newfound prosperity to the nation, Colombia remained staunchly divided into two opposing camps.

In 1899, a full-blown civil war, the War of a Thousand Days killed, tens of thousands on both sides. In 1903, a seriously freaked out Panama bowed out of its union with Colombia and became independent.

The struggle between the Conservatives and the Liberals erupted again in1948, with one of the bloodiest civil conflicts in modern history.

La Violencia, took place between the paramilitary forces of the Liberal Party and the Colombian Conservative Party, consisting mainly of armed self-defence groups and military units. The war cost up to 300,000 lives and neither side was victorious. A military coup toppled the Conservative government in power. Military rule remained in place until 1957, when both parties agreed to overthrow the junta.

That year, the leaders of the two parties signed a power-sharing pact known as the National Front. This would mean that, for the next 16 years, the two parties would alternate in the presidency every four years. Sound reasons able? Well, they also banned all other parties from participating in national politics.

THE RISE OF FARC

Resentment soon began to brew, as the Conservative-Liberal cooperation did little to address the vast inequalities that plagued Colombia, thanks to a Colonial legacy of unjust land distribution and an impoverished mestizo and indigenous underclass.

Colombia was ripe for an armed communist insurgency. Among the outlawed political groups that formed during the 1960s were the Russian-backed Revolutionary Armed Forces of Colombia, known to the world as FARC.

A guerrilla movement who claimed to be fighting for Colombia’s poor, FARC waged a terrorist-style war against the government for 55 years, until the 2016 peace treaty signalled the end of the world’s longest continuous civil conflict.

As communism began to crumble, FARC lost the support of Moscow and turned to kidnapping, extortion and the drug trade to finance its struggles. As FARC territory encompassed vast swathes of prime coca-growing countryside, they became entangled with the drug cartels who were growing in power thanks to the rise of the cocaine trade, creating both allies, enemies and yet more violence. 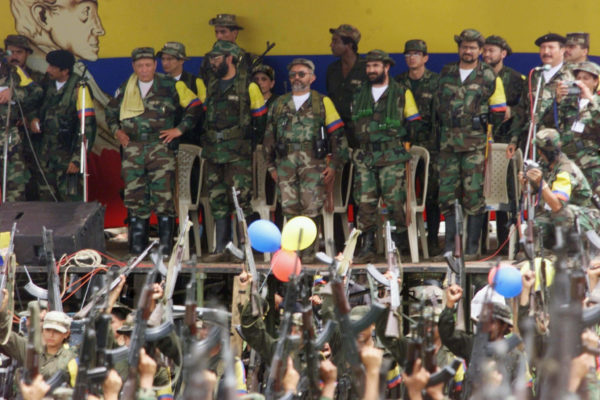 The cocaine boom of the 80s saw cartel leaders like Pablo Escobar begin amassing incredible wealth, and even political aspirations.

Backed by the US, the Colombian government launched an offensive against the cartels. The cartels asserted their dominance by bombing banks, government buildings, newspaper offices and even a passenger plane.

After a decade long manhunt, Escobar was finally tracked down and killed in Medellin in 1993.

Escobar’s death had little effect on the drug supply. However, his death, along with several other high-profile arrests, lead to the eventual dismantling of highly organised crime syndicates. Numerous smaller enterprises and gangs took their place, often cooperating with the increasingly influential Mexican cartels.

From the late 80s until the mid-2000s, Colombia was as dangerous for the average civilian as ever, with gang warfare on the streets and FARC continuing their campaign of bombings and kidnappings in the countryside.

Colombia elected Alvaro Uribe as president in 2002, pinning their hopes on his anti-gang, anti-drugs and anti-guerrilla campaign.

Uribe immediately stepped up military action against the guerrillas, successfully liberating many regions from FARC control and restoring a stability Colombians hadn’t experienced in years.

Still, Uribe’s aggressively pro-military stance was criticised as failing to address abuses committed by the armed forces themselves (a primary reason ordinary people took up arms with FARC in the first place). 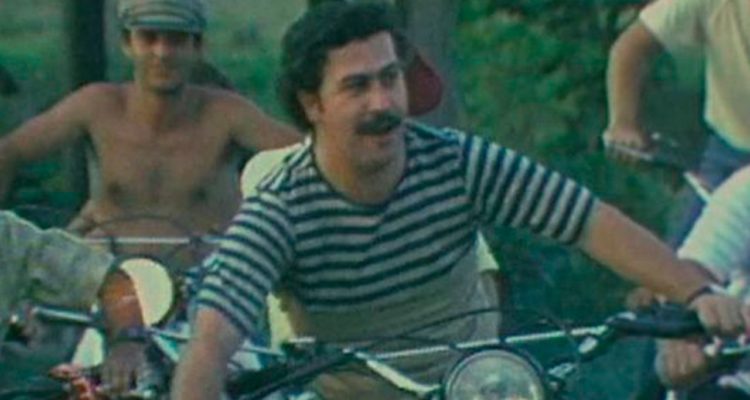 In 2010, Juan Manuel Santos was elected president. Although his campaign was supported by Uribe, Santos surprised the world by instigating peace talks with FARC. A treaty was conceived, to be ratified by referendum, but narrowly missed majority support.

A revised Peace Accord was approved in November 2016. The historic deal finally put an end to Colombia’s two-party system, allowing former FARC members to create their own political party, the Common Alternative Revolutionary Force. The accord also decreed that perpetrators of human rights abuses on both sides on the conflict must be held accountable and restricted from political participation.

Most FARC members have disarmed willingly, but whether the negotiations will end the violence entirely remains to be seen. So far, progress has been met with numerous hurdles. Still, the vast majority of ex-FARC remain in support of peace. Like the rest of Colombia’s 49 million inhabitants, they are tired of conflict.

Their hope is that the next generation of Colombians only knowledge of war and violence will be relegated to the history books. 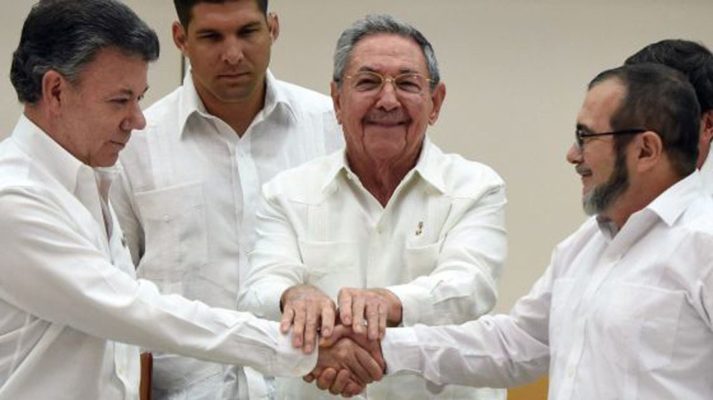 MOTORCYCLING IN COLOMBIA NOT EXCITING ENOUGH? HOW ABOUT A BIT OF HISTORY ON THE SIDE?

There’s much more to MotoDreamer’s tours than riding around dominating the roads like a modern day, motor-powered conquistadors.

We want you to fall in love with the country. That means getting to know the people and culture and how history has influenced their identity.

Ancient history buffs should look into tours with visits to important historical landmarks.

If you’re fascinated by American pre-history, visits the mystical stone sculptures of San Agustin and the underground burial chambers of Tierradentro.

Our tours in the Guajira desert takes us to the least developed corner of Colombia. The local Kogi and Wiwa people are direct descendants of the Tairona, and still hold on to some of their millennia-old traditions. Tours can start in Cartagena, the most beautiful of all Colombia’s colonial cities.

No matter which tour you choose, you’ll be stopping off in picturesque Spanish-era villages from the gold rush days and interacting with the many diverse cultures of Colombia – a country striving for success against the odds and smiling all the while.

LEARN SOME HISTORY WITH US 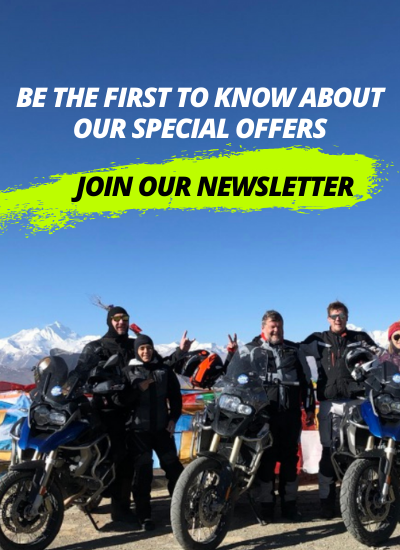