The vast, fertile tract of countryside at the foothills of the Cordillera de Los Andes is known as Colombia’s Zona Cafetera.

Also sometimes referred to as the Eje Cafetero (Coffee Axis) and the Coffee Triangle.

The Zona Cafetera covers the departments of Quindío, Caldas, and Risaralda. This once remote backwater has earned a reputation for producing the finest coffee arabica beans in the world.

Mecca for worshippers of the coffee religion, the Eje Cafetero has plenty to offer the unconverted. Such as lush mountain landscapes, tiny townships with cute Colonial architecture, and some of Colombia’s most magnificent national parks.

First Secret Tip included in MotoDreamer´s Guide to Zona Cafetera: Take on countless twisties on traffic-free backroads, explore rarely-visited rural villages and visit waterfalls and hot springs, all without leaving the comfort of the tarmac.

GETTING TO COLOMBIA’S COFFEE TRIANGLE

Coffee exports have made the Eje Cafetero the most developed region in rural Colombia. Also, the vast majority of roads here are sealed – no off-road experience necessary! With your own set of wheels and a combustion engine, getting almost anywhere within the Coffee Triangle is a breeze.

Armenia’s regional capital is 280km from Bogota and is an easy, straightforward 2 hours, or roughly 180km from Cali.

Manizales is the closest major city to Medellin. While it’s only 200km south, roadworks, landslides, and heavy vehicle traffic mean the journey can sometimes be slow-going.

WHEN TO VISIT AND WEATHER CONDITIONS

Mild temperatures and decent rainfall define the climate year-round, so there’s no good or bad time to tour the Zona Cafetera.

A typical day will flip flop between warm sunshine and showery patches, plus the occasional heavy downpour. Early in the morning and after rain, beware of low-hanging mist obstructing visibility.

Yes, it does get a little wet here, but the scenery wouldn’t be nearly as vibrant, and the coffee not nearly as tasty otherwise.

The capital of the Caldas Department, Manizales, is one of the three main cities in the Coffee Region, alongside Pereira and Armenia. Overlooked by most tourists who head straight to the villages closest to the plantations

Another Secret Tip included in MotoDreamer´s Guide to Zona Cafetera: For a taste of “big city” life in coffee country, Manizales is easily the most pleasant coffee capital. It´s home to around 400,000 residents.

Manizales nevertheless enjoys a relaxed and friendly small city vibe and has a handful of handsome Spanish-style Colonial buildings. Also, it is well known for being a university town. In addition, Manizales lays claim to the best nightlife in the region.

Firmly entrenched on the ‘Gringo Trail,’ once-sleepy Salento absorbs the majority of tourists visiting the Coffee Triangle. Due, in part to its location, 30 minutes from one of the biggest drawcards in the region, the giant wax palms of the Valle de Cocora.

Still, Salento has more than enough charm to hold its own. With looming mountains in the near-distance and coffee plantations stretching all the way to the edge of town. Salento’s streets are lined with white-walled colonial houses. You will discover their doors, window frames, and balconies painted in whimsical combinations of rainbow-bright color.

While tourists can sometimes seem to outnumber locals, Salento is hardly Disneyfied. The businesses are locally owned, the natives friendly, and the vendors undemanding. Meeting other travelers and arranging tours is no problem in Salento. Accommodation is plentiful, with many guesthouses able to accommodate gated parking for your moto.

20km from Salento. Filandia has almost twice the (permanent) population of the town as mentioned earlier yet feels far quieter, slower, and more like itself – unconcerned by the trappings of the backpacker economy.

The cheerily painted facades of Filandia’s residences are vivid and varied as the most colorful Salento street. The tourist crowds of Salento can sometimes feel a world away, and visitors will find themselves quickly easing into Filandia’s languorous pace of life.

Another Secret Tip included in MotoDreamer´s Guide to Zona Cafetera: Once you’ve done a coffee plantation tour or two, there’s not much to do in Filandia itself other than wandering lazily from café to café. Later settle down for opportunities to exchange banter with the friendly locals, which is precisely what gives Filandia its irresistible charm.

Yet another Secret Tip included in MotoDreamer´s Guide to Zona Cafetera: While Filandia has its fair share of fans, Salamina’s status as a ‘secret gem’ remains safe for now. An isolated pueblo of some 19,000 souls. Salamina is almost 4 hours from Salento and a 70km journey along a scenic secondary road south from Manizales.

Also, Salamina shares the same distinctive heritage architecture as other coffee towns. Again you will see white walls and rainbow-hued timberwork. Its leafy plaza sits overlooked by an all-white church with a looming ivory tower. 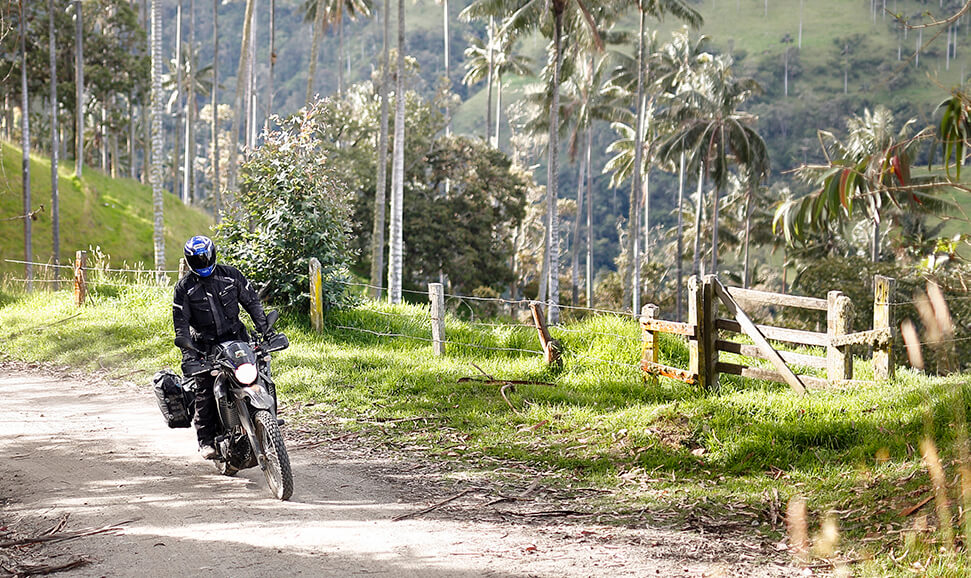 Why go out of your way to see yet another Colonial coffee town?

Salamina may well be the single most beautiful village in the entire region. Also, it is recognized as one of the 17 pueblo patrimonies (heritage towns) by Colombia’s official tourism department.

Last Secret Tip included in MotoDreamer´s Guide to Zona Cafetera: 25km east of the town, giant wax palms (the same type that makes the Valle de Cocora Salento’s most famous attraction.) You will marvel at seeing them growing prolifically in an undulating valley near the village of San Felix.

While it’s not quite as dramatic as Cocora, you have a good chance of having the company of the trees entirely to yourself.

Coffee fincas (farms) blanketed across vast swathes of the Eje Cafetero. Now, for those who want to get a bit closer to the source of their morning espresso, many fincas provide lodging in hacienda-style accommodation. Some haciendas are incredibly luxurious, befitting the tastes of the wealthiest of plantation owners. While others are more humble, homestay-like affairs. Some fincas offer free food and lodging in return for volunteer work. 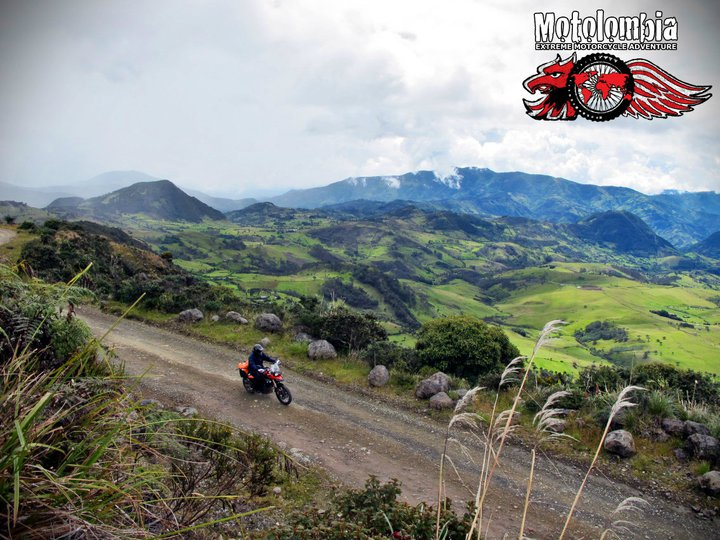 Conveniently located, extraordinarily scenic, and packed with things to do. The Zona Cafetera is an excellent addition to any two-wheeled touring itinerary, from leisurely coffee tastings to intense multi-day hiking excursions.

Also, the mountain scenery is spectacularly lush and evergreen. No matter where you point your tires, the Andean roads deliver curves till the cows come home.

If you’re inexperienced or not a fan of riding off-road, the Zona Cafetera is perfect. Since you can easily plan a route sticking exclusively to sealed roads without missing any significant sights and attractions.

You´ll start from Cali and later stop in at Salento, followed by Filandia Valle de Cocora. Here you will visit a working coffee finca, with hot springs, waterfalls, and more.

While nearly every road in the coffee country is as curvaceous as it is scenic, MotoDreamer highly recommends putting a half-day aside to take the road less traveled and experience one of the absolute best rides in the region.

In fact, Between La Virginia (60 km north of Salento) and Supía is a smooth and winding blast north along a quiet stretch of Highway 25.

Featured in our Top 10 Paved Roads of Colombia list, this 100km one-way trip is tonnes of fun without being overly demanding, with lots of swooping curves and some genuinely stellar scenery.

MotoDreamer wishes to add to your growing knowledge with the following articles on Colombia and three of their amazing destinations – Cali, Cartagena, and Popayan:

Cartagena the most romantic city in Colombia

Cartagena is the most romantic city in Colombia. Lay eyes on Cartagena and prepare to be lovestruck. Let’s see why. As a Seasoned Adventure Motorcycle Rider, you may have heard city names like Bogota, Medellin, and Cali. But, there is a hidden gem that is perfect for starting your next tour – Cartagena.

Why should I visit Popayán?

Why should I visit Popayán? Cartagena has everything and more. In contrast, I have never heard of Popayán! – Colombia’s 480 Year Old Colonial ‘White City.’

ARE YOU READY TO TASTE THE WORLD’S BEST COFFEE WITH MOTODREAMER?