Ask a random person what the Colombian people are most famous for, and the answer may well depend on whether they’ve met many Colombians in their time.

Someone well acquainted with a Colombiano or two might tell you that Colombians are some of the most irrepressibly friendly folk you’re ever likely to meet.

They might describe your stereotypical Colombian as energetically social, outgoing, and a little boisterous at times. This ‘typical’ Colombian is passionate when speaking their mind. Yet almost invariably warm and polite, deeply affectionate among friends, and kind to strangers.

The Colombian loves to party, reveres, and adores their family, and is so enthusiastic about life, in general, their non-Colombian friends can occasionally find them exhausting.

In other words, Colombians, as a whole, is a pretty damn happy bunch of humans.

But don’t just take our word for it.

There’s hard, scientific evidence that proves Colombians are some of the happiest people on earth.

The annual Gallup International poll attempts to rank the overall happiness of a country’s population by asking questions like:

“As far as you are concerned, do you personally feel happy, unhappy, or neither happy nor unhappy about your life?”

Whether this question is really an accurate way to measure human happiness on a collective scale is up for debate. But it does seem to work well for the Colombians.

Colombia has topped the rankings for the World’s Happiest Country several times in the last few years.

Most recently, they were declared the planet’s most contented citizens in 2016. In the last survey conducted in 2017, Colombia narrowly missed out on a first place to the Fijians. Who we’ll readily admit are worthy competitors in the World Happiness stakes. 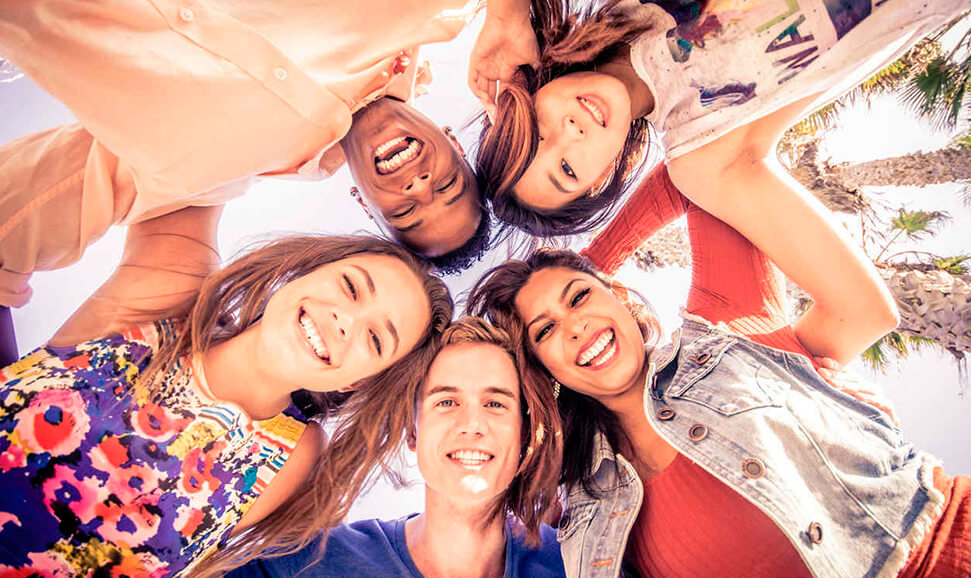 But Why is Colombia – Home to the World’s Happiest People?

If you’ve ever visited Colombia, you’ll have quickly discovered just how outwardly cheerful and optimistic they are.  If you are scheduled to visit soon, you will be greeted by an abundance of warm welcomes, and at times you will experience firsthand the downright exuberant the vibe is in much of the country.

Do not fret, even in a big, seemingly stressful city like Medellin. You can walk the streets and expect to be greeted with genuine smiles, polite curiosity, and pleasant conversation wherever you go.

In Medellin, I poised the question to a local Paisa. “Why are you Colombians so damn happy all the time?”

“Tiny  Triumphs such as love, humor, and enjoyment in Trying Times.”

Not so long ago, life wasn’t so easy for my Paisa friend. In fact, growing up as a young man in the 90s, Medellin wasn’t just tough; it was downright dangerous.

Even before the drug war broke out, Colombia was already weighed down by decades of conflict and political unrest. For generations of Colombians, poverty, powerlessness, and the ever-present threat of violence were part of everyday life.

My Paisa friend explained that trauma and grief are an inextricable part of the Colombian collective psyche. But both despite this, and because of it. Colombians are resilient and determined to seek out and treasure every precious moment. The fulfillment of enjoyment, humor, and love amid times of tragedy is so vital to them.

How else, he asked, would we Colombians have survived? “We focus on the good things in life, no matter how small.”

Here are five answers to why Colombia – Home to the World’s Happiest People.

Colombians are a patriotic bunch and unabashedly vocal when it comes to talking up their country’s natural beauty—and never forgetting its magnificent culture and its beautiful people.

Then comes the Colombian emeralds. These are also regarded as the best in the World. Now when you get onto the topic of Colombian Spanish, they will assure you it is the best Spanish spoken in the World.

Football is more than a game in Colombia; it’s a unifying force. Attend a football match in Colombia, and the atmosphere is exhilarating and emotional, as parties erupt across the stadium and fans celebrate with wild abandon.

At the 2014 World Cup, Colombia scored their best performance, making it to third place. By the way, the entire nation carried on; anyone would think the championship was theirs. Another fine example of why Colombia – Home to the World´s happiest people is natural.

3. HOLIDAYS AND FESTIVALS are essential in making Colombia – Home to the World´s Happiest people

Some of the most famous festivals that celebrate Colombia – Home to the World´s happiest people, include:

4. MUSIC AND DANCING the lifeblood in making Colombia – Home to the World´s Happiest People.

Music and dance lie at the very heart of Colombian culture. Colombia – Home to the music is a vibrant melting pot of Spanish, European, Afro, and Latin Caribbean influences.

All of which are heard in the country’s defining genre, cumbia, with its tropical rhythms, hip-switching grooves, explosive horns, and stirring vocals.

Colombians embrace all styles of Latin music – the more danceable, the better!

Passionate, sensual, romantic, energetic, and spirited, Colombia’s love of Latin rhythms plays an undeniable role in the shared willingness to embrace the joys of life wholeheartedly. You will witness Colombia – Home to the World´s Happiest People is indeed real.

5. OPTIMISM. Last but not least reason for making Colombia – Home to the World´s Happiest People

An April 2013 edition of Time Magazine featured a photo of then Colombian President Juan Manuel Santos on the cover and the blurb and headline “the Colombian Comeback.”

“From nearly failed state to the global player – in less than a decade.”

In a nutshell, this article, Colombia – Home to the World´s Happiest People, is the story of contemporary Colombia. While things are far from perfect, they’re improving at a rate almost nobody predicted less than two decades ago.

Colombia is working hard to build up and maintain a politically stable landscape. As it does so, it opens doors to a new era of economic and social progress. Furthermore, it allows for a more self-empowered, optimistic, and hopeful Colombia.

Colombians are a people of faith – faith in a better tomorrow.

After the past two definitely horrible years we all have had to endure with lockdowns, masks, and the odd variant or two, it’s finally time to bring back those golden smiles to all our happy Colombians again. They cannot wait to see you again.

The 10 Most Beautiful Villages in Colombia

Destinations in Colombia to add to your bucket list. With so many wildly varying destinations, planning a trip to Colombia can be overwhelming! To give you some inspiration, we’ve compiled a list for you.

Ride with MotoDreamer, see for yourself what makes Colombia – Home to the World’s Happiest People.