Is Motorcycle Touring in Colombia safe? This single most frequently asked question one about exploring Colombia with a bike. Bring up your plans regarding Colombia in conversation, and the response may well be, “are you crazy?”

Here’s where a dose of reality comes in handy.

Colombia, of course, has an incredibly tragic history of violence. But with the collapse of the major crime syndicates over a decade ago, the ongoing peace process between FARC and the Colombian government is taking shape.

Colombia has been undergoing a massive transformation, resulting in an incomparably safer environment for all.

Dozens of great tourist sites once sealed off in remote parts of the country have been reclaimed.

The cities are also faring better at the time of Pablo Escobar’s death in 1993. Medellin had one of the highest homicide rates per capita in the world. By the mid-2000s, this ugly statistic had fallen by 86%.

As a visitor, it’s probably best to look at it this way. More tourists than ever are visiting Colombia. The vast majority of them come back alive. Lonely Planet ranked Colombia 2nd in their 2017 “Best in Travel” list. Hardly the kind of accolade you would bestow on a war zone.

Indeed, poverty and violence are still issues for many people living in Colombia. However, there’s nothing uniquely or worryingly dangerous about today’s Colombia from a tourist’s perspective. Visitors can travel around the country freely, by any means they wish. Motorcycles included. 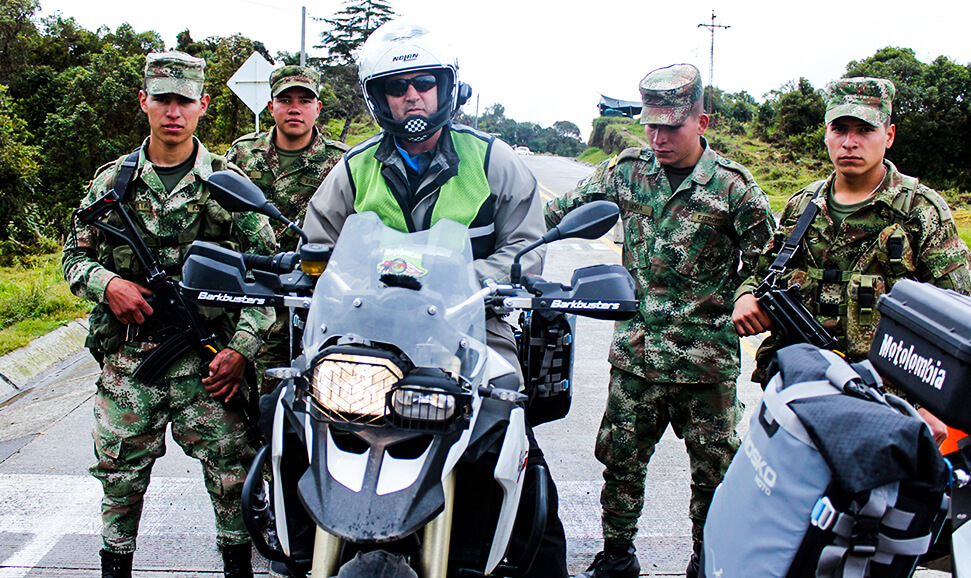 To start to answer the question; is Motorcycle Touring in Colombia Safe? Let’s look at the general safety in Colombia.

Only a handful of the millions of tourists who visit Colombia every year fall victim to crime, and most are non-violent street crimes. On rare occasions, armed robbers. target tourists But pickpocketed is a far more likely scenario, particularly in crowded public places.

We won’t go into being street-wise and avoiding crime in Colombia, as there’s plenty of advice out there already. Primarily basic, common-sense rules that should apply when exploring an unfamiliar city.

The best advice is to heed the popular Colombian saying, ‘no dar papaya’ (literally, don’t give papaya.) In a nutshell, it means don’t make yourself an easy target, and it’s the best advice on being streetwise anyone can provide.

Twenty years ago, touring Colombia by motorcycle – definitely not recommended.

These days, with the massively improved security situation, riding Colombia’s highways and backroads is nothing like it used to be. Gone are the days the risky game of ‘try not to get kidnapped’ was at the forefront of every rider’s mindset.

While wrong to say roadside incidents have been eliminated altogether. Thankfully, they are scarce. Furthermore, tourists are not the targets of these organized plots.

Despite the threat to tourists being vastly downgraded, some governments still have travel warnings in place for parts of rural Colombia. In our view, the official travel advice issued by many governments doesn’t always apply. The latest data often exaggerates the dangers, if only to cover their own backsides if you do run into trouble.

When considering is motorcycle touring in Colombia safe? Do take note of their advice, but at the same time, always do your own research.

However, you should check with your insurer to ensure you´re covered in places with travel warnings against them. 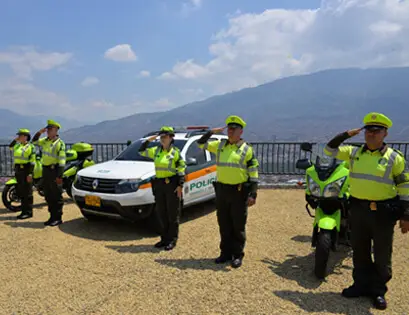 The subject of is Motorcycle Touring in Colombia safe? It should always start with you, the rider.

Road conditions and your level of experience are the main limiting factors for planning your motorcycle touring routes and destinations in Colombia.

For example, what if you don’t have much off-road experience? If so, we at MotoDreamer recommend that you stick safely to the many beautiful sealed roads the country offers.

In addition, the challenge of learning to handle a bike on dirt requires another set of skills. Now, combine learning with oblivious drivers, crazy truckers, and all sorts of hazards.

Remember, riding in your hometown is your comfort zone. Taking the next stage of motorcycle touring without the necessary experience under your belt will result in an unpleasant, if not downright dangerous, incident.

Many rural parts of the country have poorly developed infrastructure. Even a place with some semblance of a ‘road’ can be difficult or impossible to reach by bike at certain times of the year.

Heavy rain, combined with damage from trucks, can turn dirt roads into impassable muddy tracks. Help can be hard to find if you end up stuck on a particularly remote stretch of road.

If you’re not sure about a particular route, ask around for advice before setting off. The knowledgeable duo of Mike & Diana at MotoDreamer and adventure riding forums like Adventure Rider – Ride the World. Are excellent sources of first-hand information pre-trip.

To help you answer your question: Is Motorcycle Touring in Colombia Safe?

Authors Note: you are halfway with this fantastic list for staying safe on the Colombian Roads. Is it time for a brew of rich Colombian Coffee?

In conclusion: Is Motorcycle Touring in Colombia Safe?

Accept from the outset your hazard perception skills will be tested to the fullest.

Remember, there are three types of police who can stop passers-by – military, National Police, and el Transito. However, big bikes are rarely stopped. If you do get waved over, you’ll usually experience nothing more than a brief, polite exchange.

Nearly everyone is friendly and considerate of foreign Adventure Motorcycle Touring Riders and of course their big bikes!

It’s all part of why Motorcycle Touring in Colombia is Safe & so Rewarding.

Now have we convinced you to come? Do you want evidence? Then check out our next three positive articles on our experiences of safety in Colombia

Colombia & Biodiversity goes hand in hand. This magical country is listed as one of the world’s “megadiverse” countries. Does the thought of being up close to megadiversity, never mind biodiversity on your touring motorbike, set your juices flowing? Let’s see why.

Eight natural sceneries in Colombia that will astound you

The 10 Most Beautiful Villages in Colombia